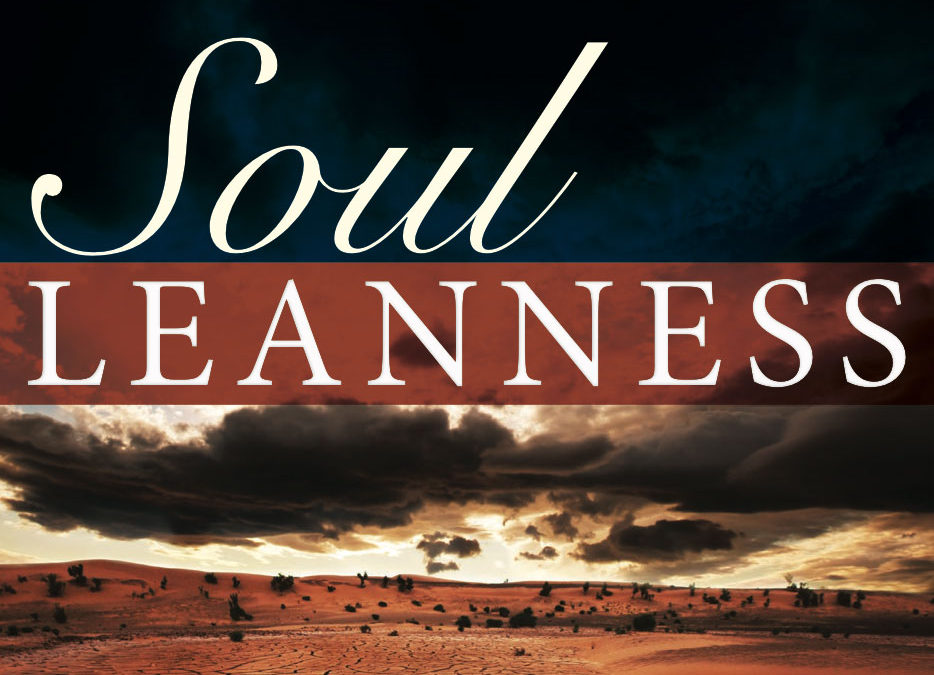 IT IS NOT GOD’S plan for His people to be lean in their souls, yet there are multitudes of professed Christians who are below the level in spiritual blessing. Soul leanness is noticed by loved ones, friends, the people of the world and most of all by the blessed Christ.

Soul leanness is inexcusable. Here was the king’s son, with free access to the king’s table and yet coming up lean from day to day. We can understand why spiritually ignorant people in sin might try to find satis-faction in worldly entertainment, the taverns, nightclubs, rodeos, bowling alleys, ball games, skating rinks, theatricals and television.

It is not too surprising to see people of the world worshiping the gods of fashion and materialism but it is impossible for us to see how these things could have any appeal to children of the King who are com-pletely satisfied in Christ! At the table of the Lord is plenteous grace for the asking.

Since mine eyes were fixed on Jesus,
I’ve lost sight of all beside!
So enchained my spirit’s vision,
Looking at the crucified.

Soul leanness is caused by failing to feed on the word of God, neglecting the means of grace, and as in the case of Amnon, by an illicit love affair. Far too many people have their affections set on some earthly Tamar of money, dress, or sensual pleasure. The Bible says, “Set your affections on things above, not on things on the earth.” (Col.3:2)

The results of soul leanness are tragic and far reaching. It produces hypocrisy. Just as Amnon was put-ting on the sick act, there are those who appear to be one thing when they actually are another. Soul lean-ness also results in a loss of spiritual discernment. Amnon became blind to the tragedy that was sure to follow his sinful indulgence. Sin always has two aspects; the way it looks when one is being tempted and the way it looks after it has been yielded to. Amnon actually hated Tamar after the gratification of his lust. There is also a loss of power because this leanness permits an inconsistency that kills a person’s testimo-ny.

Soul leanness leads eventually to the loss of the soul. In the case of filthy Amnon it did not stop with the defilement of his beautiful sister but it finally brought his own death.

In one of his books, E.E. Shelhamer tells of an affinity that developed between a man whose wife was sick and a woman whose husband would not attend church with her. The leanness in their souls culminat-ed in the wrecking of two homes.

There is a blessed cure for soul leanness. The cure is begun when one makes an honest examination of himself, casting aside all excuses and frankly facing his condition. Many people fail because they will not admit their spiritual poverty. Women in professed holiness churches will display their knees, wear jewel-ry, cut their hair, and still claim to be saved and sanctified. Sissy men with their long hair and their love for earthly, sensual things will still profess holiness. Others, with attitudes of stinginess, selfishness, an-ger, pride, bitterness and hatred in their hearts will still testify to victory. Like the Laodiceans, they think they are rich and increased with goods, and have need of nothing; and know not that they are wretched, and miserable, and poor, and blind, and naked. ( Rev. 3:17)

A further step toward recovery is the renouncing and forsaking of every illicit love affair. “No man can serve two masters.” Let God burn out selfishness and stinginess.

“The liberal soul shall be made fat.” Humble repentance brings the victory. “ He that covereth his sins shall not prosper: but whoso confesseth and forsaketh them shall have mercy.” (Prov. 28:13) “If we confess our sins, he is faithful and just to forgive us our sins, and to cleanse us from all unrighteous-ness.” (I John 1:9) “Let the wicked forsake his way, and the unrighteous man his thoughts: and let him return unto the Lord, and he will have mercy upon him; and to our God, for he will abundantly par-don.” (Isa. 55:7)

There is a fountain filled with blood,
Drawn from Immanuel’s veins,
And sinners plunged beneath that flood,
Lose all their guilty stains. ?