We Have An Anchor 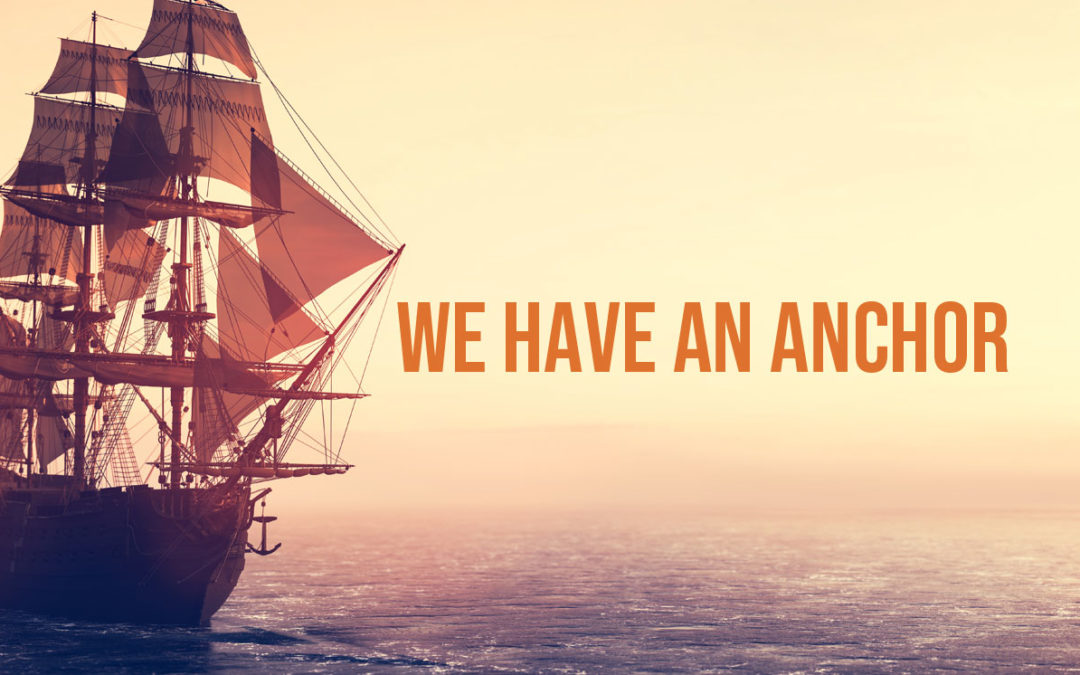 Living along the Crystal Coast of North Carolina, it is not uncommon to see ships from around the world anchored in a local port, having sailed across the Atlantic Ocean to deliver their cargo to the United States.

In order for these large ships to safely arrive at the docks, they must follow a specific channel, but many times, these ships are coming from parts unknown. In spite of modern GPS technology, they do not know exactly where the channel lies, so a channel pilot will take a small boat from the port to meet the ship and guide it safely into harbor.

It is very important that the ships follow the channel pilot carefully, because if they veer too far to the right or the left, the water is too shallow, and the captain may run the ship aground, damaging or possibly destroying his vessel.

In the days before modern forms of communication allowed a ship to call ahead for a channel pilot to guide them, maneuvering into the narrow entrance of a harbor between reefs and sand bars under high winds was one of the most risky ventures a ship’s captain had to perform.

To minimize the risk of a ship-wreck, the olden-day skipper would lower his ship’s anchor into a small row boat, and men in the small boat would row through the hazardous entrance of the harbor, and drop the anchor overboard. Then, with sails down, the sailors on-board would pull the ship by the line attached to the anchor past the dangerous obstacles—rocks and reefs and sandbars—and through the narrow opening into the safety of the harbor. For those salty, old ship-captains that anchor was a source of security. It gave them the confidence needed to navigate their ship safely into harbor.1

HOPE IN THE FACE OF UNCERTAINTY

This common practice of the mariners of yester-year may help us better understand the words of Hebrews chapter 6:

“…we…have a strong consolation, who have fled for refuge to lay hold upon the hope set before us: Which hope we have as an anchor of the soul, both sure and stedfast, and which entereth into that within the veil; Whither the forerunner is for us entered, even Jesus…” (verses 18b-20a)

The writer presents powerful imagery of the hope, stability and security of those who are connected to Christ Jesus.

There is a veil that separates us here on this earth from the mysteries of Heaven, and we encounter many dangers along the journey of life. But just like the old seaman lowered his anchor to the crew that rowed ahead into the harbor, we can connect to Christ by grace through faith. Jesus Christ, through His death, burial, resurrection, and ascension has taken the anchor of our vessel ahead with Him, and it is securely fastened in the harbor of Heaven. As long as we maintain our connection with Him, we can have confidence that Jesus Christ, our Living Anchor, will help us safely navigate the stormy seas of life until we reach that desired haven (Psalm 107:30).

This “hope set before us” is not just wishful thinking. It is as sure as the unchanging purposes and promises of God (verse 17). This “hope we have as an anchor of the soul” is a confident expectation that our God will keep us from sinking beneath the winds and waves of adversity and will bring us safely home.

COMFORT IN THE FACE OF TRIALS

The original recipients of the letter to the Hebrews knew something about the storms of life. The first centuries of church history were marked by periods of intense persecution. Many early Christians had their livelihoods stripped away from them. They endured the confiscation of their home and possessions, and untold numbers lost their lives simply because they were followers of Jesus. The early believers were well acquainted with the pressures of a world that was antagonistic to their faith.

Perhaps it should come as no surprise that one of the most common symbols of Christianity in that era was the anchor. The shape of an anchor was etched in stone on many of the graves of the Christians buried in the catacombs of ancient Rome. In fact, some sources suggest that in the first years of the Church, the anchor was used in much the same way that the cross is used today, and that the cross was not largely used in Church symbolism until the fall of the Roman Empire, since it was such a shameful and cruel form of execution.

It was to these suffering saints that the writer of Hebrews declared, “Hold on! There is hope! In the middle of these storms we have an Anchor that is sure and steadfast. This Anchor will hold us steady in the storms that we’re facing!”

STABILITY IN THE FACE OF STORMS

2020 was a year marked by storms. 2021 promises much of the same, and yet, as Paul Harvey once said, “In times like these, it is helpful to remember that there have always been times like these.”

The Scriptures tell us that as Christians in a sinful world we are strangers in a foreign land. We are pilgrims on a journey, and we have been called to live out our faith in a world that is no friend of God or grace.

Yet, for all of its rejection of religion, the American culture is steeped in idolatry. It has set up its modern pantheon of idols: the worship of self, the worship of the state (looking to the government to supply every need, to answer every question, and to be the solution for every problem), the worship of sexual immorality, the worship of science (the words of scientists have replaced the Word of God as absolute truth), and the worship of stuff.2

The root of everything that is wrong in our culture can be found somewhere among those idols. Because our world is so obsessed with the pursuit of these gods, the prevailing atmosphere is increasingly hostile to all that we hold dear as Christians. There are some dark storms raging in our society.

Beyond the storms that are brewing on a broad cultural level, there are storms we face as individual believers, simply because we live in a fallen world. Personal storms threaten to bash us against the shoreline of life—sickness and disease, the loss of a loved one, financial struggles, emotional trauma—storms that threaten to shake us at the very core of our being.

On top of it all, we have an enemy who is cunning and treacherous and who delights to fill our minds with his lies. He is the accuser of the brethren, and he would love to destroy your faith and your confidence in God. He would be thrilled to see you sink beneath the waves of doubt and confusion.

But we have an anchor to keep us on course even in the worst of storms! It is the anchor of hope! This anchor is Jesus, and all that is true of the character of Jesus Christ—His unchanging faithfulness, His steadfast love, and His watchful care—gives us stability and peace in the storms of life.

PURPOSE IN THE FACE OF ADVERSITY

It is no mistake that we are here in this world, in this moment, under these specific circumstances. We are here with God’s full knowledge, and we are here with the promise that He will keep us anchored in Him and guide us safely home, regardless of what happens.

Therefore, no matter what happens in 2021 and beyond, He expects us to continue standing for truth. The Great Commission did not come with an expiration date, so we are to keep right on advancing the Church, preaching the Gospel, and making disciples. We are to keep standing for the rights of the unborn and promoting the sacredness of marriage between one man and one woman for life. He intends for us to keep right on faithfully serving Him, boldly confronting the challenges of our culture, and making a difference in our little corner of the world for the glory of God.

In 1943, at the height of WWII, a pastor’s wife and mother of five, Mrs. Ruth Caye Jones, put down her local newspaper after reading news of the slow advance of the Allied army and perusing a list of yet more war casualties, pulled a pad of paper and a pen from her apron pocket, and began to write:

We Christians are eternal optimists because of the “hope we have as an anchor of the soul, both sure and steadfast.”