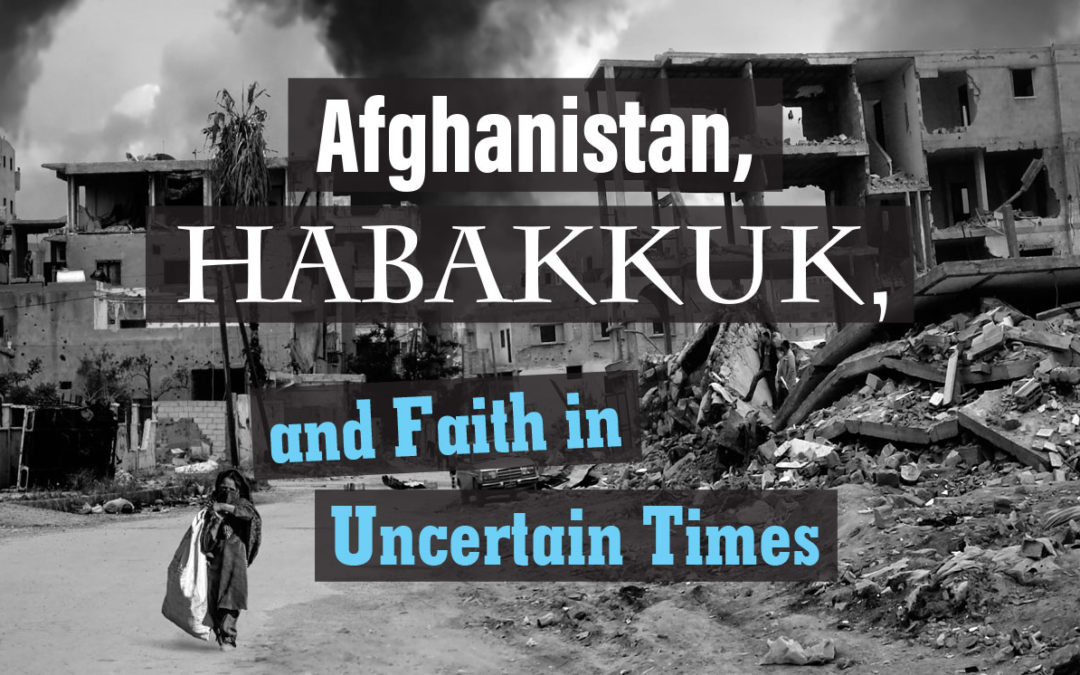 Several weeks ago, we watched the nation of Afghanistan fall into the hands of the Taliban. Images of thousands of frantic people crowded on airplane tarmacs, clinging to the exterior of aircraft, hoping to escape the unknown horrors of a future in the hands of an extremist Islamic regime will not soon be forgotten.

But while much attention has been focused on the political and military implications of the situation in Afghanistan, one overlooked segment of the population has been greatly affected—Afghani Christians.

As Taliban forces overtook the nation, pastors and church leaders were forced to flee their homes and go into hiding with their families. A missionary who corresponded with several Afghani church leaders reported that their first and greatest prayer request was that the Lord would strengthen them in their faith. One Afghani Christian described the present situation as a dark storm, and then he asked for people to pray that God would somehow use the circumstances to bring revival to the people of Afghanistan.1

This unnamed Afghani brother is not the first man to call out to God for spiritual revival in the face of seemingly insurmountable odds. Among the minor prophets of the Old Testament is a man named Habakkuk who prayed, even as ruthless Babylonian invaders prepared to invade his homeland and carry his people into captivity, that God would send revival to his land (Habakkuk 3:2).

Habakkuk’s prayer for revival came from a heart that was deeply burdened for the sins of his people and greatly concerned about the judgment that God had revealed was coming at the hands of the Babylonians.

The people of Judah deserved judgment because of their continued sin and rebellion against God’s Law, but Habakkuk prayed that in God’s wrath He would remember mercy. He recounted the many times that God had demonstrated His great power on behalf of His people in the past (3:3-15), and then he made an incredible declaration.

To paraphrase, Habakkuk said, “Even if the fruit trees stop bearing fruit and our crops fail and we have no livestock in the fields or in our barns…” (This was a poetic way of saying, “Even if our livelihood vanishes and we have no food and we end up living in poverty…”) “I will still rejoice in the Lord and find my strength and confidence in Him!” (3:17-19)

Habakkuk, how can you say such a thing in light of all that God has just revealed to you is about to happen to your homeland?

The answer is found in Habakkuk 2:4. Habakkuk had fully embraced the truth that the just shall live by faith! Habakkuk began his book in the pits of despair (1:2), but he ends on the pinnacle of delight (3:18-19), and the thing that made the difference was his conscious choice to maintain his confidence in God in spite of the circumstances. Even in the darkest of storms, those who choose to put their trust in God and commit to be steadfastly faithful will ultimately rise above the current situation to a place of joy, stability, and strength.

We may not know about fruit trees that fail to blossom or olive trees that do not produce olives, but we have felt the effects of a struggling economy, national supply lines that have failed, political unrest and riots, and a virus that has dramatically disrupted our way of life. We also see churches that lack spiritual power and are bearing little real spiritual fruit. Like Judah of old, too many have devalued the authority of God’s Word and capitulated to the spirit of this present age. Some have bowed to the idols of political correctness, while others, in the words of Alexander MacLaren, “…like vultures after a full meal, have so gorged themselves with the garbage of this present life that they cannot fly and have to be content with moving along the ground—heavy and languid.”

What should our attitude be in the midst of these things? Some choose to insulate and isolate themselves and ignore what is happening around them. Others choose to become overwhelmed and surrender to a spirit of negativity and defeat. But Habakkuk shows us a better way to handle ourselves in the face of difficulties and uncertainties—make the choice to rise above discouraging circumstances, recommit to faithful obedience, and maintain absolute confidence in the character and power of God.

May God revive our faith, and give us a holy optimism of what He is able to do in our world, in our nation, in our ministries, in our churches, in our families, and in our individual lives—even in times like these!