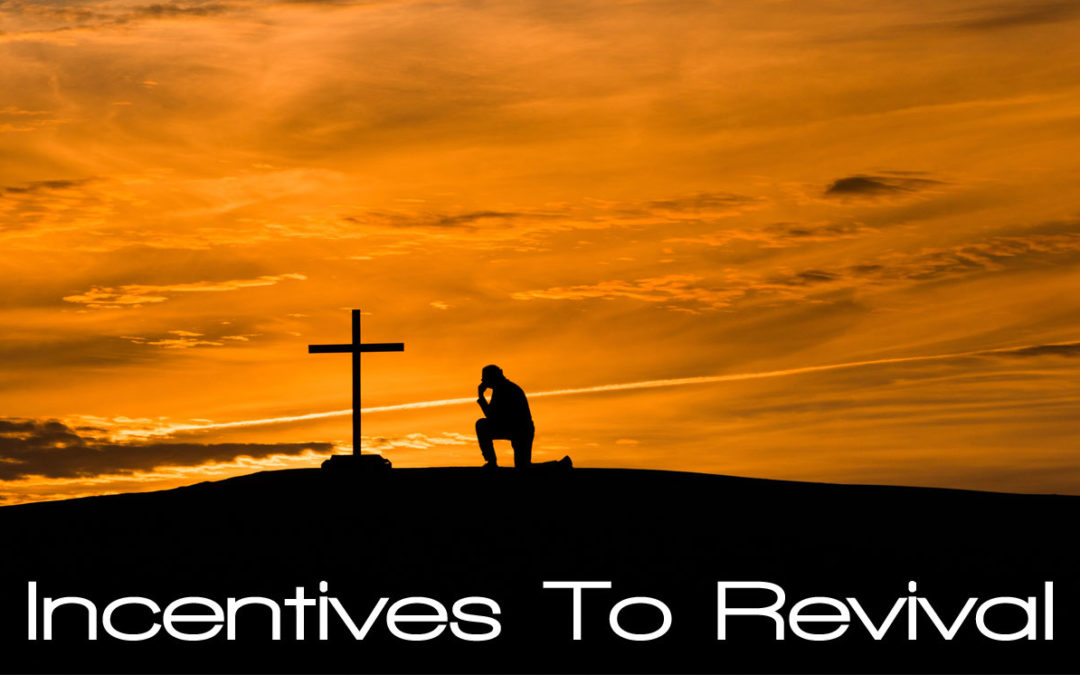 G. Campbell Morgan said, “We cannot organize revival, but we can set our sails to catch the wind from Heaven.”

Among many incentives which may help to stimulate a genuine revival, the following may be considered:

THE PROMISES OF GOD

“Call unto Me, and I will answer thee, and shew thee great and mighty things, which thou knowest not.” “Behold, I will do a new thing; now it shall spring forth; shall ye not know it? I will even make a way in the wilderness and rivers in the desert.” The “exceeding great and precious promises” of the Word of God are the divine warrant for revival and they have never been known to fail.

John Bunyan said, “Search and see, look in the Book and read; Was there any who did trust in Him that was put to shame?”

James Caughy pleaded and prayed for mighty local revivals throughout England on the strength of Mark 11:24…When he arrived on the shores of Great Britain from America he quietly told evangelical Methodist leaders that God was going to do mighty things…Churches were revolutionized and tens of thousands of souls were saved, among whom was William Booth, the founder of the Salvation Army.

God keeps His covenant engagement. All the promises of God are free plunder to faith!

There is an appalling ignorance among Christians concerning the laws of revival and the history of revival. T.S. Rendall notes: “The Bible is the best manual on revival. Let the believer search the Scriptures and he will discover the laws that govern spiritual awakening. In addition, there are many books on the subject of revival that will both enlighten and encourage the believer…It is part of the lukewarmness of today that pastors are not systematically teaching their flocks the principles of true revival.”

Tragically many Christians have read little and have little desire to read about revival. Every Christian should discipline his reading habits, in order to become better acquainted with significant past revivals.

The subject of revival should be a frequent topic of conversation among Christians. Discussion and serious thinking about God’s mighty acts can prove a great incentive to kindling faith and passionate prayer for revival.

News of revival movements in other areas and in other countries has often quickened the flame of concern for revival in the hearts of God’s people. No fact is better established than that the rehearsal of the incidents of other revivals have been of great service in many a work of grace. Jonathan Edwards stated, “There is no one thing that I know of that God has made such a means of promoting His work among us as the news of others’ conversion.”

The influence of powerful Biblical preaching is another important incentive which cannt be overestimated in preparing for revival. Orthodox theology has always been the hidden source of truth revival. The dynamic preaching ministry of those who have bene used of God in revival has always been thoroughly Biblical. When the Bishop of London complained about Whitefield’s preaching a “new Gospel” in his diocese, Whitefield replied that, regretfully, it did sound like a new message to many of his hearers, but actually it was the “old Gospel of salvation by grace.”

It is not preaching orthodox theology alone that produces awakening—it is preaching under the anointing of God the Holy Spirit.

The supremacy of the Word of God in every work of God is a divinely ordained principle. It applies with greater relevance and importance than ever before to a gracious season of revival.

Revival prevents theological stagnation and restores and reaffirms the doctrines of the Bible in all the glory and fullness.

Fairbairn wrote, “[The] indispensable prerequisite to a revival of religion and one closely allied to prayer is the preaching of the whole Gospel under the anointing and power of the Holy Spirit. Preach holiness as a doctrine. Preach sin. Preach repentance, confession, restitution, regeneration, the witness of the Spirit, entire sanctification, Heaven and hell. Preach the whole Word of God. Such preaching will result in the pardon of sinners, the restoration of backsliders, the entire sanctification of Christians, and the general quickening of the Church. It will clarify the moral atmosphere of a community.”

When can the Church expect revival? The Church can expect a glorious revival:

When this happens revival will be a reality.