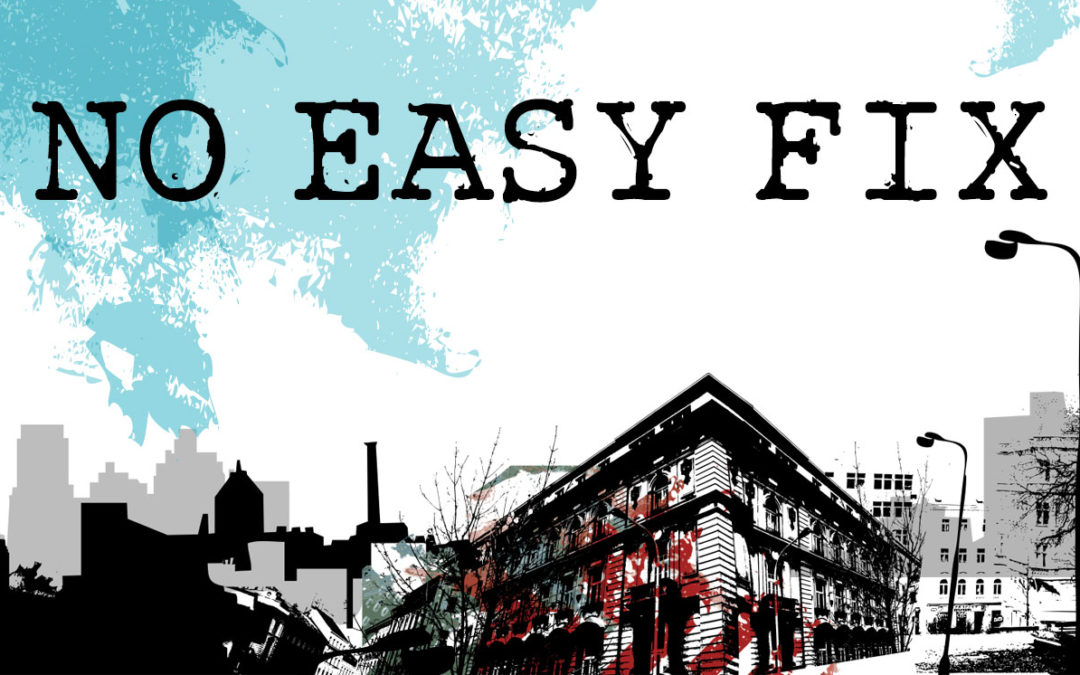 In other news, another murder on the east side of Indianapolis last night brings the total homicide count to 72 for this year,” reports the newscaster, “The name of the victim has not yet been released, but police tell us that most likely the incident was drug-related.” Not quite sure what a Christian response to gang violence, teen pregnancy, or 1000 abandoned houses should look like? You’re not alone. The problems of the inner city are overwhelming and often misunderstood. Their complex nature leads many to ignore the inner city and just hope it goes away.

We live in a society where every problem supposedly can be resolved in a 122 page book or a 30 minute program. There is a fundamental belief by many that “things are going to get better.” Some people call it faith, some people call it optimism. But the underlying assumption is that problems, any problem, can be able to be fixed quickly with the right amount of money, help and education.

Christians are particularly baffled by today’s inner city. The haunting scene of abandoned buildings, urban blight, decaying infrastructure, homeless people, and unfettered violence are confusing. They are mixed with the deeper spiritual landscape of dark depravity, rampant corruption, and general hopelessness that cannot help but depress the most optimistic of spirits if you look at it long enough. And so most don’t look. They retreat to some safer place. The inner city becomes a place to do missions trips, a place to remember “just how blessed we really are,” a place to give a gift at Christmas.

If they do look, some may seek to make sense of these complex problems by oversimplifying them. They look for an easy fix. “The problem with these people is that they’re all lazy; they just need to get a job and get off welfare!” They want to see the inner city rectified in 30 minutes, so that they can read the story in the 122 page book and move on with life. They love to hear those rags to riches stories, and say, “See it’s possible; everyone should do that!”

But there is no easy fix. There are no short term solutions. The systemic problems of the inner city that are revealed in the symptoms that we see (e.g. poverty, homelessness, urban blight) are part of the larger struggle with the “principalities and powers.” The city is a place where the effects of sin, evil, and rebellion against God are clear for everyone to see.

If all that was involved was fixing up a few buildings, then it might be doable, but we are not wrestling against flesh and blood. The problems of the inner city are fundamentally spiritual problems with many physical ramifications. Seeing the darkness driven back, seeing the seed of the Gospel take root in these hard-packed places, seeing lasting cultural change will require a long term commitment from the people of God in those places. It will mean more than a 10 year, 20 year, or even 30 year commitment. It will take a multi-generational approach to “discipling the people” (the Great Commission) to rebuild the basic foundations. It will take an approach focused on affecting the great-grandchildren of the children we are currently discipling.

What does that include? Here are a few thoughts:

• It includes being intentional about raising our own children to see and embrace the mission of God in the world. For more than two generations, we have been losing our own at an alarming rate. The statistics say that evangelicals are losing at least 75% (some studies as high as 90%) of their children to the world. With smaller families and a retention rate of 10-25%, you don’t have to be a math genius to realize that we are a few generations from extinction. If we can’t convince our own children, then what chance do we really have of convincing the watching world?

• It involves creating the holistic, contrast community of Christ instead of just “having church.” As the people of God, if we are living, working, and worshipping in community, we will shine “like a city set on a hill that cannot be hid.” Our life together as the people of God should be witness of the risen Christ “in whom are hidden all the treasures of wisdom and knowledge.” Any group of people sharing life together at a high level, loving God and their neighbors, cannot help but make a difference.

• It involves rebuilding broken homes (and building solid ones for the future.) Coming alongside families of all shapes and sizes with Biblical teaching on marriage that is modeled in the lives of leadership is vital. The family has long been the epicenter of Satan’s attack on the church. Fatherless families are everywhere, but there are also families who have fathers who have abandoned or neglected their God-given role and responsibilities. Instead of equipping and empowering men to pastor their families, too often the church’s response has been in essence, “Only trained professionals should handle God’s word. Don’t try this at home!” A deplorable deficiency of premarital counseling, marriage counseling, or teaching and preaching on the home has led to devastating results.

• It involves breaking the cycle of darkness and depravity by raising up new generations with a Christian worldview. “He that spends the most time wins.” Education has to include more than school work. Shaping the worldview of the next generation to see themselves as being equipped now to enter their calling in the world and in the community of Christ has to start early. We must catechize. We must build on the Biblical basics to develop their unique skills as gifts to the Body of Christ.

To hang our heads and sing sad songs while we wait for Jesus to pull us out of this mess with His Second Coming, might sound like the only viable solution to some. To bemoan the fact that the church as we have known it is on the decline in the U.S. might lead us to think that the Kingdom of God is shrinking, but it is not. To run from the inner city with all of its evil may seem like the only thing left to do, but God is not finished.

I still believe in the power of the Gospel to transform. What sin kills, grace will restore. The Stone of Daniel 2 is growing into a mountain that will fill the whole earth. God is in Christ reconciling the world to Himself, and His Kingdom is here!

There is no easy fix, but the answer today is the same as in every generation — for the people of God to live faithfully while we are working, hoping and praying for His Kingdom come, His will to be done, on earth as it is in heaven.

To stand idly by and do nothing because we cannot see how our efforts can “make a difference” is a statement of our lack of faith in God; it is to bury our talent in the ground.

There is a brighter day coming. While there is no easy fix, we can dedicate our lives anew to the work that God is doing in the city and trust Him to work His transformation in response to our faithfulness. After all, God is at work in the city bringing His Kingdom, and the very least that we can do is to work with Him in faith to see His rule and reign expand.