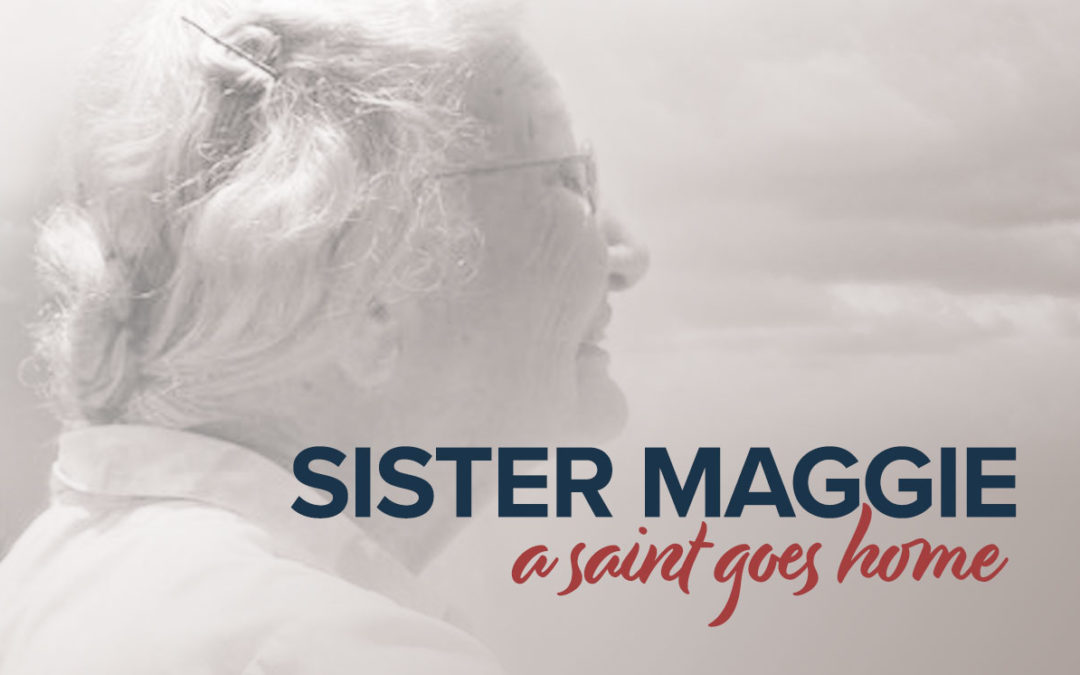 Recently, my wife and I were privileged to attend the home-going celebration of a saint of God.

Over the years I have supplied the pulpit occasionally at the Bible Methodist Church in Cordele, Georgia. Whenever I did, I could count on there being a beaming white-haired sister sitting about three rows from the front on the left-hand side. Her radiant countenance and ready smile would just pull the “preaching” right out of you.

This past January she suffered a stroke which paralyzed the right side of her body, but left her mind, memory, and speech clear. Then she had another series of strokes which left her unable to speak clearly and in a semi-coma until the Lord she loved and served translated her into a place where sickness, sorrow, pain and death are never known—and we went to her funeral.

There we learned more details of her Christian life which I would like to share with you all.

Maggie Martin was born in 1930 and in 1950 married Adair Ingram. They were not Christians but did attend church regularly. Her husband was sickly, but still a hard worker with a solid reputation as an honest, dependable man. In 1956 and 1957 he built a house for his family which by then included three children—Joe, Kay, and Debbie.

One Sunday morning Adair went to church by himself. At the close of the service he went forward and publically gave his heart to Christ. Many folks shook their heads and said, “If Adair Ingram wasn’t already saved, then there ain’t none of us saved!” But he knew his own heart and the Holy Spirit had spoken.

Adair had smoked cigarettes for years, but he immediately left them off when he got saved as he felt the practice was displeasing to the Lord. A great many folks he knew who were church members and professing Christians smoked, but he simply obeyed the Lord and quit. Then, of all things, the pastor of the church they attended told him he did not need to take such a fanatical stand—that he could “enjoy” a cigarette if he wanted to. (The pastor himself “enjoyed” them, you see.) So this new Christian started smoking again. But, immediately, he felt convicted by the Holy spirit that he must not defile the temple of God (his body) with that which is unclean, and he put the cigarettes down for good—whether others felt the same way or not.

Not long after Adair’s conversion, the ill health that had troubled him from boyhood grew worse until he was confined to his bed. The doctors gave him only a few weeks to live. Maggie rarely left his side during that time. One day he suddenly became alert and exclaimed, “Oh, Maggie, Maggie, do you see them?”

He said, “Angels all in white, Maggie. Right over there, and they’re motioning for me to come.”

With that her husband slipped away to be with the Lord, leaving Maggie a twenty-seven year old widow with three young children to raise. He had spent just two days and nights in his new house which family and neighbors had finished for him after he was unable to work.

All this gave Maggie a deep desire to know the savior her husband had found, and soon she prayed through to real victory. She became a tireless worker for the Lord, teaching in Sunday school, helping in VBS, inviting folks to church—but most outstanding of all was her ministry of intercessory prayer for her family, church, and community.

As time went on, however, more and more unscriptural worldly trends began to be apparent in her church. Finally, she and others who had a desire for a church fellowship which held Biblical standards and was on fire for God heard about the Bible Methodist Church—a group that desired to return to the zeal and purity of the Wesleys and original Methodism and had organized some local churches over in Alabama. So after much prayer, they cast their lot with them.

When a new church was organized in Cordele, she gave land off a corner of her farm for a church house, which was built about 300 feet from her own house. Money was not plentiful in the new group and many sacrifices and much volunteer labor was invested in the birth of the church.

Later, when a pastor was called to come, Maggie rented a house for her and the children so the pastor could live in her house next door to the church. Several pastors did so until money was raised to install a doublewide trailer behind the church for a parsonage.

Maggie’s zeal for souls, her love for the Lord, and her humble faith became more or less legendary all over the area. She drove her car many, many miles over the country, visiting in homes, inviting folks to church and hauling children to Sunday school. Her prayerful and positive life became known and appreciated in many other churches too. The number of community people at her funeral surely attested to that.

The following incident illustrates the simple faith and love for others that always characterized Sis. Maggie. Once she read in the Cordele Dispatch that a local young man had been arrested and locked up in the Crisp County Jail. As a boy he had been in her Sunday school class. On Sunday morning she called the sheriff, whom she knew well.

“John,” Miss Maggie said, “I saw in the paper that you had Jimmy L____ down there in the jail. He was one of my Sunday school boys. Would it be alright if I come down and get him and take him to Sunday school and church then give him a good dinner and bring him back in the afternoon?”

Surely the sheriff had to blink a couple of times when he heard that request, but when he found his voice, he said, “No, Sister Ingram, I’m sorry, but we cannot allow that. He had his opportunities to do right, now he must suffer for the consequences of his bad choices. Pray for him.”

Walter Hedstrom, for many years the President of the Southern Bible Methodist Conference, conducted Sister Maggie’s funeral. He read reminiscences sent in by former pastors of her church, all recounting what a blessing she had been to them and to the church during their ministries there. It was a very heartwarming part of the service.

Then we followed the hearse to a cemetery by a country church a few miles south of Cordele where our dear sister, whose godly influence had nudged many lives Heavenward, was laid to rest beside her husband. They had been separated by death for 62 years, but while we were having a little graveside committal service and vainly trying to find words to thank the Lord for having blessed and inspired us through the life of one of his choicest saints—I say, while we were doing that, Sister Maggie and Brother Adair were strolling arm and arm down Hallelujah Avenue in that place where… “God shall wipe away all tears from their eyes; and there shall be no more death, neither sorrow, nor crying, neither shall there be any more pain: for the former things are passed away. (Revelation 21:4)”

This touching tribute originally appeared in Echoes from the Mount and is reprinted here with permission from the author. May God fill our churches with saints who are as committed to the Kingdom as was Maggie Ingram.