Christian Education: Is It Still Relevant? 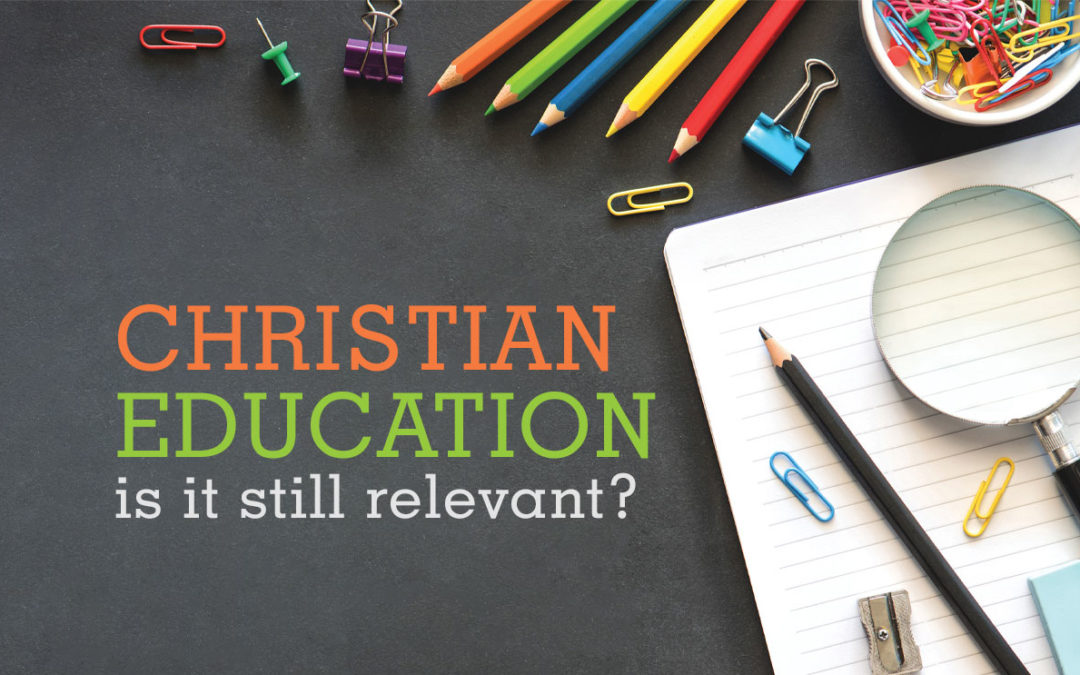 The Protestant Reformer Martin Luther once said, “I would advise no one to send his child where the Holy Scriptures are not supreme. Every institution that does not unceasingly pursue the study of God’s Word becomes corrupt…” Many years later, the famed theologian Francis Schaeffer further fleshed out Christian thought on the education of young people when he said that “Isolating the student from large sections of human knowledge is not the basis of a Christian education. Rather it is giving him or her the framework for total truth, rooted in the Creator’s existence and in the Bible’s teaching, so that in each step of the formal learning process the student will understand what is true and what is false and why it is true or false.”

Training young people to view the world, to gain knowledge, and to discern between truth and error through the lens of Scripture—this is at the heart of Christian education.

THE CRITICS OF CHRISTIAN EDUCATION

Yet the field of Christian education is not without its critics. Christian schools and Bible colleges have often found themselves in the crosshairs of secularists and Christians alike for vastly different reasons.

On one end of the spectrum are those critics who have supposed that Christian education essentially means inferior education—education that lacks quality and substance. Others have suggested that subjecting young minds to a distinctly Christian academic program is to shelter them from “real world” learning at best and to indoctrinate and “brainwash” them at worst.

Another kind of critic, forgetting that Christian academies and Bible colleges are not reform schools and do not guarantee miracles in the lives of young people, might point to the student who went astray—the young man or young woman who “went off to Bible college” and forged unhealthy friendships, chose the wrong life-companion, or made poor life decisions in general. These critics overlook the fact that individual students, not institutions, are responsible for making personal choices that have permanent consequences.

Then there are those who find fault, particularly with Bible colleges, due to a bias against formal religious education. They would not support an academic program for the training of pastors, missionaries, and Christian workers on the basis that such an education might create spiritual stagnation and intellectual pride. Perhaps some would argue that the Holy Spirit provides the only education a Christian worker could ever need.

So what of these criticisms and many others that could be made? Are they legitimate? Is there a place for Christian education in 2020? Do Christian academies, Christian home schools, and Bible colleges make an authentic and valuable contribution to the Kingdom?

THE BLESSINGS OF CHRISTIAN EDUCATION

Having been raised in the home of parents who have served in the field of Christian education, the importance of receiving an education from a distinctly Christian perspective has been ingrained on my heart from earliest memory. As the oldest of four children, when I reached school age, there was no question in our home but that I would receive an education from a Biblical world-view—a strongly held conviction which ensured that I, along with my three siblings, not only received a thoroughly Christian education from grades K-12, but each of us went on to complete a degree program in a conservative holiness Bible college.

As a result, Christian education has played a vital role in my life and spiritual formation. The first time that I remember the Holy Spirit speaking to my heart and calling me to salvation was as a first-grader in a Christian school chapel service. Several years later, as a high school sophomore, it was in another chapel service that I surrendered my life to be a preacher of the Gospel. The systematic training in Bible, theology, church history, and practical ministry that I received during my Bible college years, not to mention the spiritual atmosphere and the strong emphasis on ministry and evangelism, provided a solid foundation that has served me well thus far in 15 years of ministry. In my life, Christian education has definitely been relevant.

Sadly, not all Christian institutions are created equally, and there are those who have had some genuinely heartbreaking experiences in a purportedly Christian educational environment. But for every unfortunate incident that has happened under the banner of Christian education, the positive contributions that Christian schools and Bible colleges have made in the lives of young people is multiplied exponentially.

THE URGENT NEED FOR CHRISTIAN EDUCATION

There is certainly a need for Christians to be educated in fields of study not offered in a Bible college setting, but in a day when much of secular education is driven by a humanistic, anti-God, progressive agenda, there has never been a greater need for Christians to take seriously the education of the hearts and minds of our children and young people. If we do not take it seriously, someone else will.

In an age when society is increasingly educated and more and more skeptical toward religion in general and Christianity in particular, there remains an urgent need for pastors, missionaries, and Christians workers to be adequately and thoroughly educated in theology and apologetics so that they are able “to give an answer to every man that asketh you a reason of the hope that is in you with meekness and fear:”

At a time when Biblical literacy, even among Christians, is embarrassingly low, there is a crucial need for systematic and formal training in the fundamentals of the faith.

In a time when distinct doctrinal teaching may easily be watered down with broad, neutral Evangelical overtones, the need for crystal-clear proclamation and teaching on the historic Wesleyan-Holiness interpretation of the Biblical doctrines of sin, salvation, and entire sanctification as a second definite work of grace is paramount.

In many ways, these are challenging days in the field of Christian education. There are entities that would be thrilled to see all institutions of private Christian education close their doors forever. Financial struggles are real. Conducting elementary, high school, or college classes in the time of COVID creates its own unique challenges.

Christian school administrators, Bible college presidents, faculty members, staff members, and Christian home-school moms and dads need the encouragement and prayer support of God’s people! The men and women who give of themselves to serve in the field of Christian education are perhaps some of the most unsung heroes among Christian workers. Year after year they faithfully labor, often at great sacrifice, to mold young hearts and minds and to train future generations of Christian workers and biblically educated laypeople. The weight and responsibility of Christian academies and Bible colleges rests on the shoulders of this army of educators, and many of them may never share the notoriety of the greatest evangelists, pastors, and missionaries among us, but the work they do is vital, and their influence will live on in the generations that follow as the Lord tarries His coming.