Do We Need Revival? 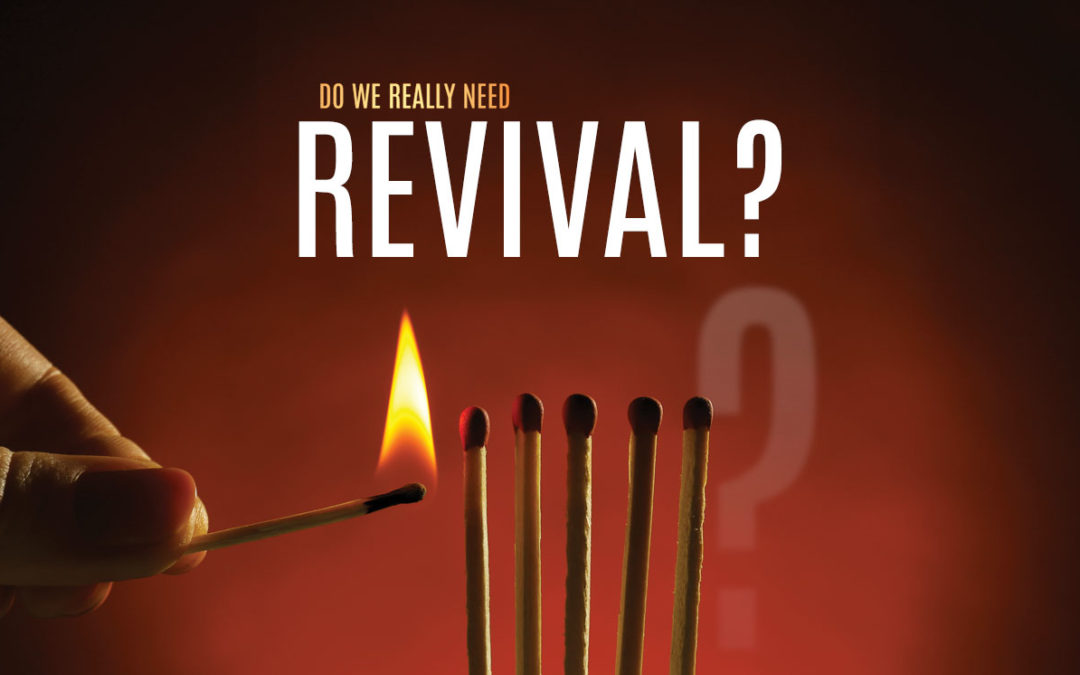 I recently encountered an article titled “Enough is Enough (or Why Revival Isn’t Necessary).” The author poked fun at churches and preachers who emphasize the subject of revival, suggesting that if Christians would simply be faithful to the Word of God and the sacraments, there would be no need for revival.

While it is true that our Christian journey consists of daily, routine, faithful obedience to Christ, Christian experience suggests that in spite of our best intentions, we seem to be leaky vessels, and there are times that we need the fresh infilling of the Holy Spirit in our lives to give us renewed purpose, passion and perspective. Church history reveals that there have been seasons of decline and seasons of spiritual awakening and revival that have marked the Church over the past 2,000 years.

The contributing factors to periods of spiritual decline in the Church are varied, but some would suggest that historically the spiritual tide recedes when a new generation comes of age who does not know God as deeply as the previous generation or when a generation that has experienced the great blessing of God becomes so complacent and satisfied with the status-quo that they no longer maintain spiritual fervency. Eras of church history when the Word of God is not clearly preached and doctrine is not precisely articulated also contribute to the weakening of the spiritual life of the Church.

Periods of spiritual decline will come, but God is deeply interested in the health of His Church, and many times He has come to breathe fresh life into it once more. It was revival scholar Richard Owen Roberts who said, “True Biblical revival begins and ends with God! Revival is God speaking, God moving, God restored to His rightful place, God manifesting Himself among His people and a watching world.”

Holiness people are not strangers to the idea of revival. Revival language has marked our preaching. It has influenced our singing and public worship. It has permeated our prayer efforts. Even the altar rail that adorns the front of many of our churches is a reminder of our revival heritage. It has been said that revival is written into our DNA as holiness people. Holiness people are revival people! But in some places the concept of spiritual revival has fallen on hard times.

There are those for whom the idea of revival is simply a nostalgic reminder of a by-gone day, bringing back childhood memories of horn-rim bespectacled accordion players and long-winded preachers.

Others have developed a negative attitude toward the subject of revival because it reminds them of some evangelist who passed through the camp meeting and revival circuit riding an outlandish hobby horse and preaching foolish notions.

And in spite of our best efforts to emphasize that true revival is more than just “a series of services,” there are those who have come to equate the concept of revival with nothing more than a scheduled event where a visiting preacher is invited to preach in several consecutive services at a local church. For them “revival” has become one more duty on a long list of obligations.

But regardless of the counterfeit substitutes and the embarrassing eccentrics, the God of Heaven still longs to visit His people and accomplish something that is real, substantive, and deeply effective in building up His Kingdom. From God’s faithfulness to the children of Israel through their cycles of rebellion, repentance, and spiritual renewal, to the outpouring of the Holy Spirit on the believers in the Upper Room at Pentecost, to the subsequent outpourings of God’s Spirit on His people throughout the book of Acts, to the great spiritual awakening in the pagan city of Ephesus, the Bible is a storybook of revival and spiritual awakening. Our God is the God of revival! He is interested in restoring the backslider. He responds to the broken-hearted and the poor-in-spirit. He is interested in renewal and reconciliation and in refreshing and reviving His work in the midst of the years. He moves towards those who move towards Him. He responds to those who come clean in His presence.

Do we really need revival?

In an age when we are sailing through uncharted cultural waters where nearly 56 million Americans identify themselves as atheists, agnostics, or “nothing in particular,” when we face a generation of young people beset with a crisis of gender identity confusion, when the authority of God’s Word is called into question and 53% of modern evangelicals believe that “many religions can lead to eternal life,” when 64% of professing evangelical men and 15% of professing evangelical women admit to viewing pornography at least once a month, when the Biblical distinctions between the church and the world seem to be ever decreasing, when many of our own Holiness churches struggle to make an impact for God in their communities, when personal or institutional politics conflict with Kingdom building, when marriages are crumbling and families are struggling, when the lives of many in the Church are marked by prayerlessness, carelessness, and a lack of appetite for the Word of God, we need revival and spiritual awakening!***

This is not the time to decide that we are too intellectually or culturally advanced to embrace our revivalistic heritage. If there was ever a time that we needed to humbly seek God’s face for revival in the Church and an awakening in our culture, it is today.

My revival-denying friend has it right that God’s primary means of working in our lives is through the daily pattern of faithfulness to prayer and the Word, and there are those who have emphasized a “revival experience” without a proper emphasis on the disciplines of the soul, but the promises of Scripture, the pattern of the early church, the record of subsequent church history, and the personal experience of victorious Christians stand as a clear testimony to the possibility and necessity of revival in our time.