If You Want To Go Up, You’ve Got To Go Down 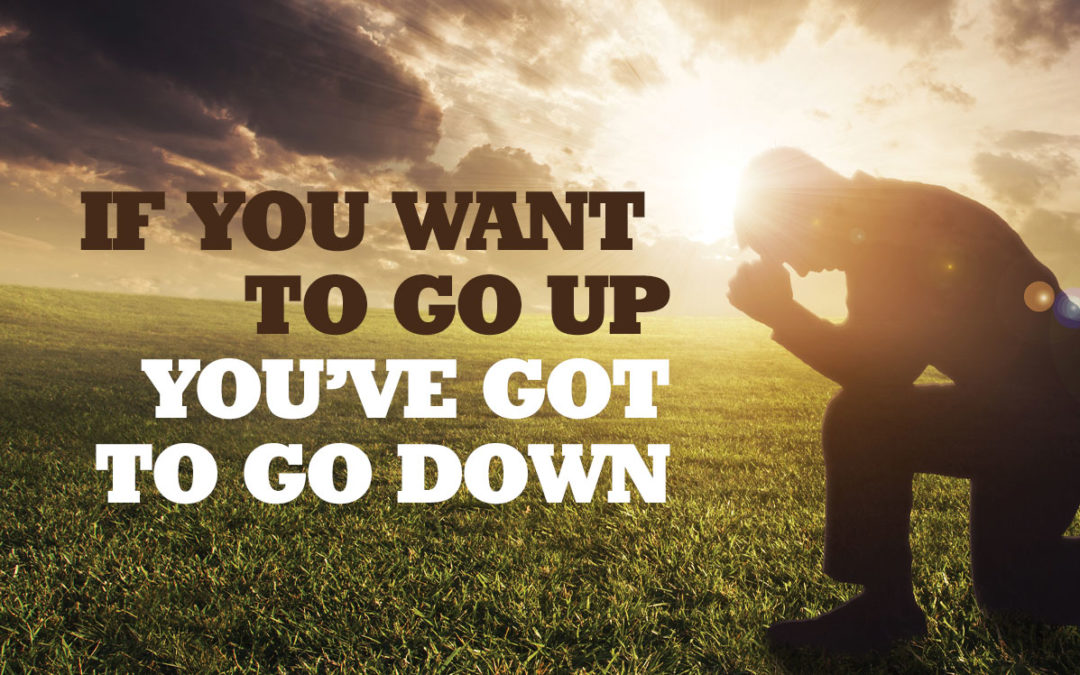 I might have been 8 but I haven’t forgotten it. My impressionable mind was indelibly stamped by what I saw, heard and felt that night in a little holiness church in Portland, Oregon. Our pastor, relatively young and wanting to do something to build the Kingdom, proposed something counter-intuitive to church growth strategies. In short, he scheduled a Confession Service. I know—an unusual method for winning friends and influencing people. But that’s what he did.

Based on the command of James 5:16a, “Confess your faults one to another,” the saints of that congregation began to publicly humble themselves through confession of their personal faults, failings and shortcomings. To this day, I can sense the broken but sweet spirit that filled the atmosphere of that modest sanctuary. Good, godly people corporately addressing specific areas where they needed the grace of God and the graciousness of His people. And I don’t remember my thinking less of them; if anything, they gained more respect. Interestingly, of the hundreds of services I attended there, almost 40 years later that humility-inspired evening towers above the rest!

Harold Vaughan in his book Revival in Our Time: Outside the Box—Inside the Book, proposes, “You cannot find a person in the entire universe who is more humble than God.” Biblestudytools.com states that “Biblical humility is grounded in the character of God.” Simply stated, He is the essence of humility and, therefore, its utmost example! We know what it is because of what he did. In fact, the invitation to have the mind of Christ in Philippians 2 is couched in the context of Christ’s voluntary humiliation of Himself, “Who, being in the form of God, thought it not robbery to be equal with God: But made himself of no reputation, and took upon him the form of a servant, and…humbled himself, and became obedient unto death, even the death of the cross.” (verses 6-8). The High and Holy One condescended to “men of low estate” and “came not to be ministered unto, but to minister, and to give his life a ransom for many” (Matt. 20:28). As the songwriter aptly summarized, “When I could not come to where He was, He came to me”!

If God is the essence and example of humility, then it should follow that humility will be an essential mark of His children. Vaughan states, “Humility has been called the royal insignia of the child of God.” It is an authenticating resemblance of the One Who has made us “partakers of the divine nature” and Who has called us to be witnesses unto him at all times and in all places. Andrew Murray declares that saints’ “whole relationship to God and man is made visible by a penetrating humility.”

In the book mentioned above, the story is told of a respected Christian doctor whose wife was a hopeless alcoholic. Night after night for multiple years this godly physician relinquished his reputation in the community to fulfill his role to love his wife “as Christ also loved the church, and gave himself for it.” One evening after being found lying in her own vomit, her heart was melted and became open to the gospel. Through the humble example of her loving husband, she comprehended a God Who “left the splendor of Heaven…to lay down His life” for her. Following her conversion, she penned these words:

He laid aside his reputation, When He came and stood by me.

Willing to take the lowest station, When He came and stood by me.

Murray, in description of this essential divine quality, says, “True humility comes when…we have seen ourselves to be nothing and have consented to part with and cast away self, to let God be all…It [now] interacts with its fellow man as one who is nothing, and seeks nothing for itself. William Temple poignantly clarifies this humility, “Humility does not mean thinking less of yourself than of other people, nor does it mean having a low opinion of your own gifts. It means freedom from thinking about yourself one way or the other at all” (emphasis mine).

If humility is an essential mark of true believers, then its presence will produce a recognizable effect and its absence should prompt a rapid repentance. Murray argues that, “It is not until Christians study the humility of Jesus as the very essence of His redemption, as the only true relationship to the Father, that the terrible lack of actual, heavenly humility will become a burden and a sorrow. Our ordinary religion must be set aside and we must receive humility from Jesus. This humility is evidence of Christ within us.”

Interestingly, it was at the same holiness church mentioned above where I learned the simple song:

If you wanna go up, you gotta go down,

Though counter-intuitive to the flesh, this “the-way-up-is-down” principle has been the secret to true spiritual progress since the Fall. This modest mindset gains the attention of and moves to holy action the God Who brings us “up” by His coming “down.” Here are some Biblical examples (adapted from F. E. Marsh):

Naaman “went down” into muddy Jordan and was cleansed (2 Kings 4:14)

The leper “kneeled down” and received cleansing (Luke 1:40)

The palsied man was “let down” and found healing and forgiveness (Luke 2:4)

Peter “fell down” before Christ and discovered his life calling (Luke 5:8-11)

Mary “sat down” at the feet of Christ and learned the Lord’s secrets (Luke 10:39)

In conclusion, Harold Vaughan’s excellent little book on revival shares some modern examples of God’s people “going down” in humility and confession that they might “come up” with victory and power! I will summarize a couple of them:

In one local church that eventually experienced a tremendous move of God, “the men and women were segregated and praying for revival. A deacon shouted out in one of these meetings, ‘Men, stop praying!’ The church had erected a fence to keep the neighboring farmer from driving his tractors and farm implements across their parking lot. They did not want the gravel in the parking area disturbed. After interrupting the prayer meeting the deacon said to those who had gathered, ‘Here we are praying for revival, but we are more concerned about the gravel in the parking lot than our neighbor’s soul who is on his way to hell. I believe we should go and tear the fence down!’ Those present heartily agreed, stopped praying, and went out and ripped the fence down. It was actions such as these that preceded the revival. This meeting extended and went on night after night with tremendous force. Astounding victories were won. Unbelievable testimony meetings lasted far into the night. The impact was far-reaching and long-lasting… Obedience brought incredible blessing!” (emphasis mine).

Another church commenced 30 days of prayer for revival. Two years prior there had been an ugly split but through this season of prayer, the church leaders “began to pray about reconciling with those who had left. It was decided to send a delegation to their midweek service to ask forgiveness for wrong attitudes, wrong words, and wrong actions. The next evening hearts were thrilled when the mission to reconcile was announced as a success. It is almost impossible to adequately describe the eagerness with which people seek to comply with God’s will in these heightened seasons.”

One other church with a Christian school had spent 3 months in humble preparation for a divine visitation. When it came, “Chapel in the Christian school lasted for nearly three hours. Students asked teachers to forgive them for cheating. Apologies were made to fellow students. The administration gave the schedule to God. Children called home to clear their consciences with their parents. With the auditorium and overflow rooms jammed with people nightly, the young people gladly sat on the floor in order to be in the service. The exhilaration level was indescribable. One lady prayed, ‘Lord, this is as exciting as going to the amusement park!’”

To those of us who profess a desire for a move of God, maybe it’s time to schedule a “Confession Service.” Whether it simply begins with the confession of one (myself) or includes the voluntary humility of many, may we take heart that, “Grace rushes to the rescue whenever we take the low road. Mercy always lifts us when we choose to kneel” (H. Vaughan).

If you want to go up, you’ve got to go down.