Nehemiah—A Man of Vision… A Man of Prayer 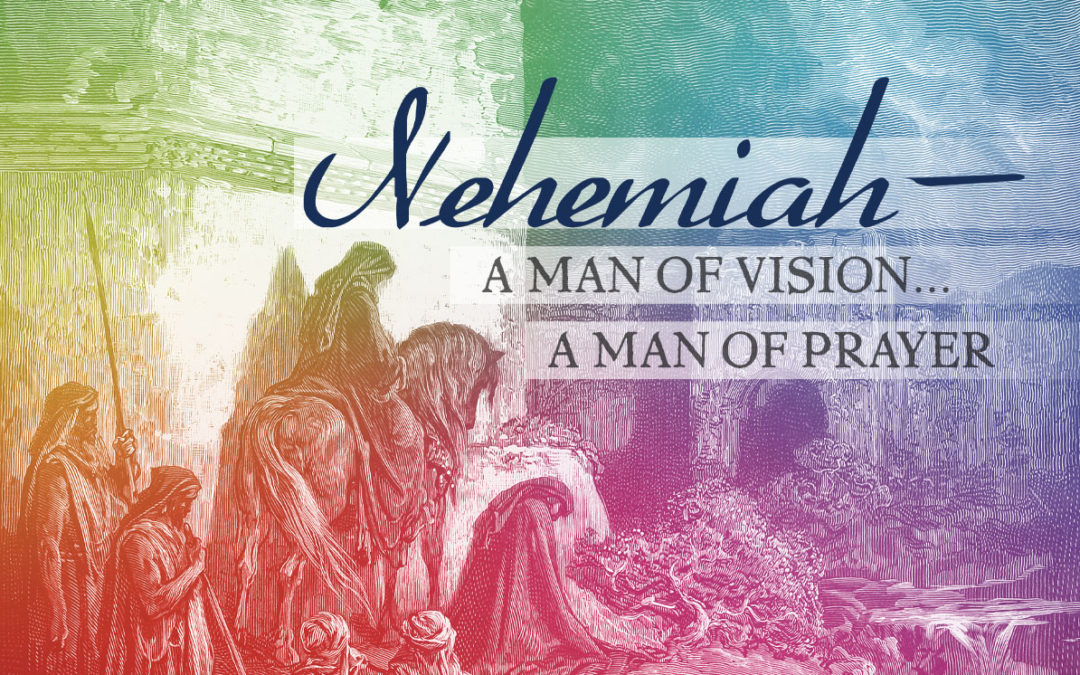 The Old Testament book of Nehemiah is incredibly relevant to the New Testament Church! The central figure of the book is Nehemiah, a leader specially qualified and appointed by God Himself to assist in the great work of rebuilding the city of Jerusalem many years after Nebuchadnezzar and his Babylonian army ransacked and destroyed it.

Nehemiah was a leader of rare distinction, and a survey of the book that bears his name reveals the outstanding qualities of his leadership.

NEHEMIAH WAS A MAN OF VISION

While Nehemiah was serving in the palace of King Artexerxes, he received a heartbreaking report of the condition of Jerusalem. In spite of the efforts of Zerubbabel and later of Ezra to rebuild the city, the walls were in disrepair and the inhabitants were fearful and discouraged. The situation was bleak, and Nehemiah was deeply troubled, but he was not paralyzed. He mourned, but he did not mope.

Just as Nehemiah wept for the sad condition of Jerusalem, God looks for men and women today who will cry tears of sorrow, pray deeply, and carry a burden for the spiritual condition of the Church. However, the Church does not need hopeless prayers focused primarily on the darkness and despair around her. Instead, it needs prayers that ring with the courage of divine optimism and are deeply rooted in the belief that an omnipotent God is able to accomplish great things even in the face of monumental obstacles. More than mere cursers of darkness, the Church needs people who know how to transform their burden into world-changing, Kingdom-advancing vision.

There will always be optimists and pessimists. George Bernard Shaw astutely observed that it took an optimist to invent the airplane, but it took a pessimist to invent the parachute. Perhaps what the Church needs most are realists—people who understand the challenges of our time with their inherent dangers and pitfalls but who also continue to focus their confidence on the faithfulness of God. With their faith in God’s power firmly established, they are willing to risk great things for the Kingdom’s sake, even in the face of seemingly insurmountable odds.

Such was the perspective that marked Nehemiah’s visionary leadership. When he arrived in Jerusalem and found the city in the condition that had been described to him, he was able to look beyond the broken walls and the crumbling city to see a grander vision of what could be.

NEHEMIAH WAS A MAN OF WISDOM

Nehemiah’s visionary perspective was coupled with a remarkable wisdom that marked the decisions he made and propelled his vision into reality. He did not arrive in Jerusalem and begin forcing an ego-driven personal agenda on the people already living in the city. Before he came to Jerusalem, he garnered the support of King Artexerxes who not only permitted him to make the long journey to his homeland but also provided some of the construction materials that would be needed to carry out the work of rebuilding the walls. The Biblical record reveals that for several days after Nehemiah arrived in Jerusalem he surveyed the perimeters of the city, took notes on the present condition of the wall, met with leaders who had significant influence among the people, and established an educated, organized, and effective plan to execute the work that God had given him to accomplish. The effectiveness of Nehemiah’s wise leadership is revealed in that the ambitious task of rebuilding the wall was completed in 52 days.

Only eternity will reveal the damage done to the Kingdom of God because of decisions that have been made and plans that have been implemented with minimal preparation and insufficient forethought. Well-meaning, but ill-informed, ill-timed, and ill-executed leadership decisions often result in devastating effects on churches and para-church ministries. The destructive consequences may be long-lasting in their reach. Enthusiasm for vision must be tempered by the wisdom and patience that Nehemiah exhibited in rebuilding the walls of Jerusalem. A lack of wisdom and humility in leadership ultimately brings shame and reproach to the name of Christ and His cause, but God always blesses those who humbly pursue wisdom.

NEHEMIAH WAS A MAN OF COURAGE

Nehemiah’s accomplishment took more than vision and wisdom. There was opposition to the work that God had called to Nehemiah to accomplish. He faced pressure from without when Sanballat and Tobiah opposed the work and ultimately raised an army to march against Jerusalem while the walls were being constructed. There were pressures from within as fearful workers left their place of responsibility and fled the onslaught of the enemy armies who were poised for attack. The enemies that Nehemiah faced were cunning and treacherous. Seven different attempts were made to stop the work, but Nehemiah would not easily back away from what God had called him to do. His leadership was marked by courage of conviction that was committed to the task at hand even when it was not easy.

The secret of Nehemiah’s courage is found in Nehemiah 2:20 when the told the people, “The God of Heaven, He will prosper us…” He was thoroughly convinced that the work he was doing was God’s work, and so he boldly encouraged the people, “We can rebuild this wall, because God is with us! God has called us to this work, and if God has called us, then it can be done!” Centuries later, the Apostle Paul dipped his pen in ink and wrote, “If God be for us, who can be against us?” An awareness of God’s definite direction and help is the ultimate source of great courage.

The world needs more Christians like Nehemiah who are so sure of what God has called them to do that nothing can stop them from fulfilling the call. Men and women of conviction with a sureness of purpose who are steadfast and so confident in the power of God that when there is opposition to God’s cause, instead of running, they courageously press ahead with what God has called them to do.

Nehemiah’s courage was not reckless—it was tempered by Godly wisdom. Effective courage in leadership is not a fool-hardy arrogance that ignores the advice of others and presses ahead in spite of wise admonitions and clear warnings. Sometimes the best thing to do is to humbly follow someone else’s counsel. The courage needed today is a deep, abiding confidence in God’s leadership that results in a humble, holy boldness to be faithful to the mission God has given even when it’s not easy! When you know that you are doing the work God has called you to do, then you can know that He will strengthen your hand to carry out the vision He has given you.

NEHEMIAH WAS A MAN OF PRAYER

Nehemiah’s greatest quality and the well-spring of all of his other positive traits was his prayer life. We need leaders with vision, wisdom, and courage, but any CEO or politician can formulate a vision, develop knowledge and a little discernment, and show courage in the face of opposition to accomplish something impressive. Nehemiah possessed all these qualities, but what made him distinctly different from the average business man, politician, or military leader was a vibrant, devoted connection to God through prayer.

No doubt, Nehemiah was well-educated. Being a close confidant of King Artixerxes, he was likely well-versed in the principles of effective leadership. He knew how to get a job done, but he also understood that the secret to success in anything is the presence and power and leadership of God. And the book of Nehemiah reveals that this godly man, did not take one step in the process of rebuilding the walls of Jerusalem without going to the secret place of prayer for strength and wisdom.

When we act before we pray, we have hitched the cart before the horse, and we will likely get out of step with the Spirit. Nehemiah’s pattern was prayer for Divine direction and then action. Nehemiah’s vision was not hatched in an evening of fevered brainstorming. The mission to rebuild the wall was not an attempt to pad his resume with an impressive accomplishment, nor was it a half-baked effort to ride the tide of popular thought and appear to be on the cutting edge of relevance. Nehemiah’s vision was birthed from his regular pattern of prayer, and the wisdom and courage that marked his life were rooted in his intimate connection with God.

Leonard Ravenhill aptly stated that, “No man is greater than his prayer life.” He admonished that “Failing here, we fail everywhere.”

There is no shortage of church growth books, blogs, and seminars to instruct us in the most effective methods to accomplish the work of the Kingdom. Experts, strategists, and life coaches may all have their value in their proper place, but none of these will ever be an adequate substitute for true, Spirit-directed prayer.

Nehemiah’s ability to lead and accomplish God’s plan was borne out of his prayer life, and the wisdom and courage with which he fulfilled his monumental calling were the result of his close connection with God in prayer. People of vision, people of wisdom, people of courage—we need them all, but what we need most are men and women of prayer!