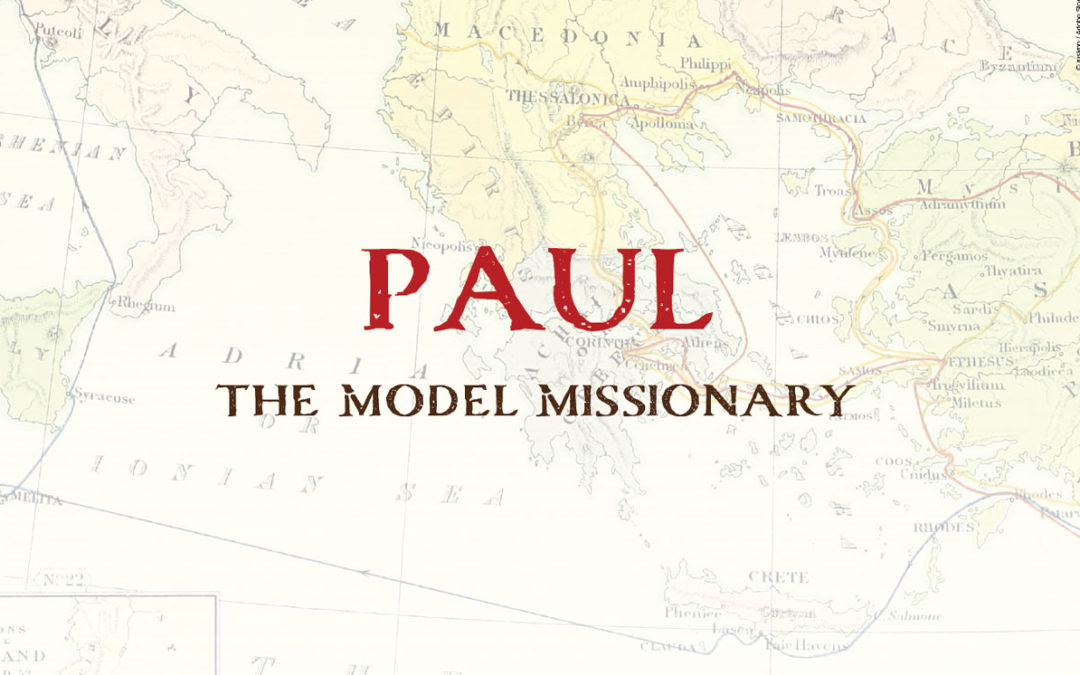 The Apostle Paul is the greatest missionary to ever live, and the example of his ministry provides a dependable pattern for every aspiring missionary, pastor, Christian worker, and soul-winner. He was thoroughly convinced of the claims of the Gospel and urgently driven to carry that good news wherever the Holy Spirit led him.

One of the most extraordinary churches that Paul established was the church of Thessalonica. Paul was only in Thessalonica for a brief period of time to see this exemplary church born and instructed in the doctrines of Christ, but the passage of time proved that even with the limited instruction they received and the hateful antagonism they endured, the faith of the Thessalonians was genuine, and Paul’s ministry among them had been truly successful.

When Paul sent his first letter to the Thessalonian church, he spent some time remembering his ministry among them (I Thessalonians 2:1-12), and in reading his words, we gain some practical insight into some of the distinctive marks of Paul’s passion for building God’s kingdom.

In the first twelve verses of I Thessalonians 2, Paul reminds the Thessalonian believers no less than four times that the message he preached while he was among them was the Gospel of Jesus Christ (vs. 2, 4, 8, and 9)—the message of a Savior who came from Heaven, sacrificed His life on a Roman cross, was buried and rose again three days later, went back to Heaven, sent His Holy Spirit to live within us, and will one day come to take His faithful followers to be with Him forever.

Paul’s message to the Thessalonians was Gospel-oriented, and he was bold in its proclamation. Paul was committed to a cause which he considered to be of greater importance than life itself; therefore, he was not concerned with self-preservation. With conviction and clarity, he told the Jews of Thessalonica that their synagogue rituals were now obsolete because the Messiah had come. He proclaimed to the Gentiles that their pagan gods could not save them, and he confronted the sexual perversion and corrupt practices that were rampant in the bustling city of Thessalonica. Paul did not preach a message that was fashioned to impress his hearers or endear him to the hearts of the leading citizens of the city, but he did faithfully preach a message that pleased God (I Thessalonians 2:4).

In every generation there is a temptation to offer cheap grace without calling people to a holy life of obedience. It is easy to minimize the offensiveness of the Gospel—to overlook the Gospel’s demands and emphasize its blessings or to focus on truths that are politically expedient and not faithfully deliver the whole counsel of God. One author noted of many church leaders today, “It’s as if we’ve decided to pick and choose which social issues we’ll contest and which we’ll concede. And our picking and choosing normally revolves around what is most comfortable—and least costly—for us in our culture.”[2]

To be sure, some have confused old-fashioned rudeness and a selfish obstinacy with boldness for the Gospel. We need not be foolishly or unnecessarily offensive, but we must be faithful to boldly proclaim all of God’s truth. John Piper aptly stated, “For every sick shepherd who offends unnecessarily, a hundred are so frightened to offend that the sword of the Spirit has become rubber in their mouths and the mighty Biblical mingling of severity and kindness has vanished from their ministry.”[3]

Though not expressly stated, it seems apparent that Paul had critics who were trying to convince these new converts in Thessalonica that Paul had self-serving motives in his ministry among them. There may have been whispered rumors of sexual impropriety and suggestions that he was trying to swindle them of money.

Any criticism of Paul’s integrity was entirely baseless. Paul wrote “You know (2:10) and God knows (2:5c) that I was honest with you at all times (2:3, 5a), and I didn’t take any money from you (2:5b). In fact, I worked night and day so that I could be free to preach the Gospel to you without any strings attached (2:9).” The integrity of Paul’s ministry was untarnished by sinful behavior, political posturing, or selfish ambition.

Who can truly know the full extent of damage that has been done and progress that has been hindered in God’s Church by professing believers who have used the guise of Christian ministry to perpetuate self-centered, self-aggrandizing, sinful, and abusive patterns?

It is a sobering reality that one day the Great Judge will call us to account for the works that we have done (Hebrews 9:27). We will answer for every word that we have spoken (Matthew 12:36), and even our motives—even motives in our ministry—will be weighed in the balances, because the Great Judge understands and searches our hearts and minds (Revelation 2:23).

God give us men and women who work honestly and humbly for the sake of the Kingdom with clean hands and a pure heart!

Not only was Paul’s conduct blameless and his motives above reproach, but his service among the Thessalonians was lovingly sacrificial.

In some ways he viewed himself as a loving mother nurturing these new-born Christians (2:7). In other ways he viewed himself as an attentive father providing necessary guidance, comfort, and correction. This was a sacrificial love. As a mother would be willing to sacrifice her life for the well-being of her child, as Jesus willingly gave His life to redeem fallen man, Paul was willing to give his own life for the sake of these new believers in Thessalonica,

His sacrificial love for the Thessalonians was a direct result of the depth of his sacrificial love for the Lord and his deep commitment to the spreading of the Gospel. Dr. Helen Roseveare, a missionary doctor in the Belgian Congo (now the Democratic Republic of the Congo) in the 1950s and 1960s, wrote of the sacrificial love needed to be effective in doing God’s work: “To love the Lord my God with all my soul will involve a spiritual cost. I’ll have to give Him my heart, and let Him love through it whom and how He wills, even if this seems at times to break my heart.”[4]

What an expression of full devotion to the will of God, the message of the Gospel, and the mission of winning souls for Jesus Christ!

[4] Roseveare, Helen. Christian Focus, 2007. Living Sacrifice: Willing to be Whittled as an Arrow.