Revival: Then and Now 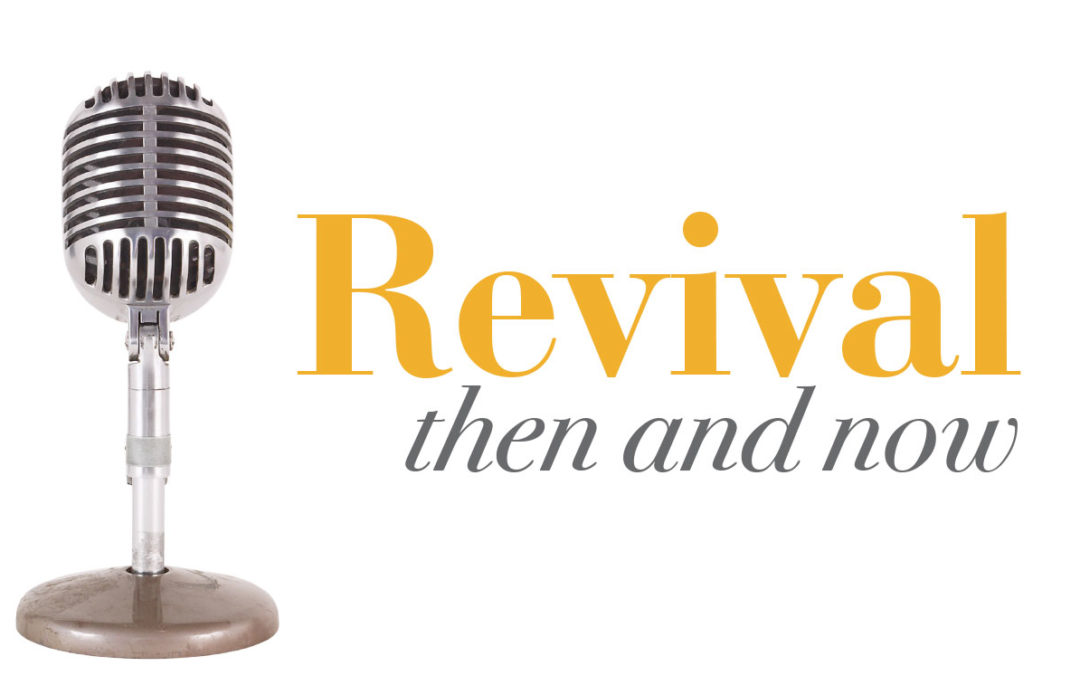 The cry for Revival is as old as the book of Genesis. In every generation, there has been someone who has cried out to God for Revival, and heaven responded. In our present day, what does Revival mean to us? In bygone days, scheduled meetings would last for two weeks, some longer. Those were the days of farm communities, small towns, when people worked hard, and traveled by horse and buggy to church, and had no modern conveniences, electricity, or running water. Yet in those days, there was still time for God to move in Revival. There were no padded pews, or air conditioning. Coal burners or wood stoves were the order for winter. Times were hard, and God’s people rose to the occasion. People were saved, sanctified, and churches were started with those who joined on the final Sunday of the meeting.

In those days, there were not many places to go, so folk went to church. When they did, God got a hold on them in conviction. There was a level of dedication, and faithfulness that was the norm. The meeting would begin, and the Evangelists would build one sermon in the next, and since folk were coming every night, by the first weekend, souls were plunging into victory. The second week, the preaching would turn to the second work of grace, and seekers would line the altar seeking purity of heart. The third week would be to build up the new converts, and help them get established. The altar would have cigarettes, jewelry, snuff, tobacco, and playing cards left behind by earnest seekers. The glory was on, and the saints shouted their way through. Following the meeting, a large class of new members would be received into the church. Snow didn’t stop them. Crops to get in or out didn’t hinder them, there was no time that wasn’t good for Revival.

People had not educated themselves wiser than God. They didn’t second guess the Bible. They revered and honored Sunday as holy.

They didn’t think they were smarter than the old saints who paved the way before, and wrote commentary on the Bible. Pastors were respected, and people heeded the word. Sports hadn’t usurped God in the U.S. For the most part, women were keepers at home, children were taught respect at school and home. People didn’t drive 45 minutes to an hour each way to work. The church was just minutes away, and school the same. Young people went to church to court. Schools didn’t have a slate of various practices and games that parents had to pledge their loyalty to. Everyone didn’t envision their child the next sports star. Mothers prayed with their children. Father was head of the home, and was involved in their lives. Divorce was almost unheard of. Boys knew they were boys, no one dreamed of a day otherwise. The whole atmosphere was different. Television hadn’t fostered a generation of degradation and wickedness. Hollywood didn’t influence the church. Hollywood stars hadn’t set the agenda for the government. Sports players didn’t get millions of dollars to bash America and lead our young astray. Sunday was a Holy day, not a work day, or holiday.

Some of you do not remember those days at all. I got in on the final days of those type revivals. In the early 60’s, many of the churches and camps were blessed of God, and I saw God move.

The drift was subtle, and the change took place so gradually, that we have now been ushered into the modern age. Where does this leave us? What is Revival like for us now? Let me tell you what I was able to discern from 12 years in full time evangelism of 46 to 50 weeks a year.

The date of the meeting must be convenient. Deer season must be avoided—bow, muzzleloader, and gun. The Thanksgiving and Christmas seasons must be avoided. Winter is too snowy and folk will not come out. Then there are ACE conventions and competitions, various school functions, all the sports practices and games will trump the Revival, so plan carefully. Fall and spring vacations must be considered as well. Then if the young people aren’t involved with sports every night, they will be working in the evenings at McDonalds or some like place, and you won’t see them until Sunday. The sinners may come one night, and maybe Sunday morning, when you will have your shortest time to preach, due to many extra things that happen on Sunday morning. Folk will generally take one night off to “rest.” Possibly the pastor and wife will miss a night or two, because they both work.  Board members may choose to paint the kitchen one night. Grandmas birthday will take some folk out. Others will be gone because they have had something planned for a long time before they heard about the meeting. Because daddy works over an hour from home, he arrives home to tired to make the trip, and the family misses several nights. The animals must be cared for, and everyone is so tired on Saturday night, they have to get ready for Sunday. The little ones have school, and they are so tired.

By now, you are getting the picture. If we have Revival, and a true move of God, we will have to agree to put things aside that are not eternally important. We must pray and believe God. We must put the scheduled meeting on top priority, we can’t give God our leftover time, and expect to see the kind of Revival we truly need. Times have changed, but God is the same. It’s us, and our world that has drastically changed. So, we must avail ourselves of every opportunity to make time for God to work. Pastors, advertise the meeting at least six months in advance. Urge folks to be present faithfully. Form prayer meetings, get everyone to pledge themselves to see a move of God. Pray sinners under conviction. God is still giving Revival to those who put him first, and when we do, He delivers in the same old fashioned way. Ⅸ