The Holy Spirit: Has He Lost His Power? 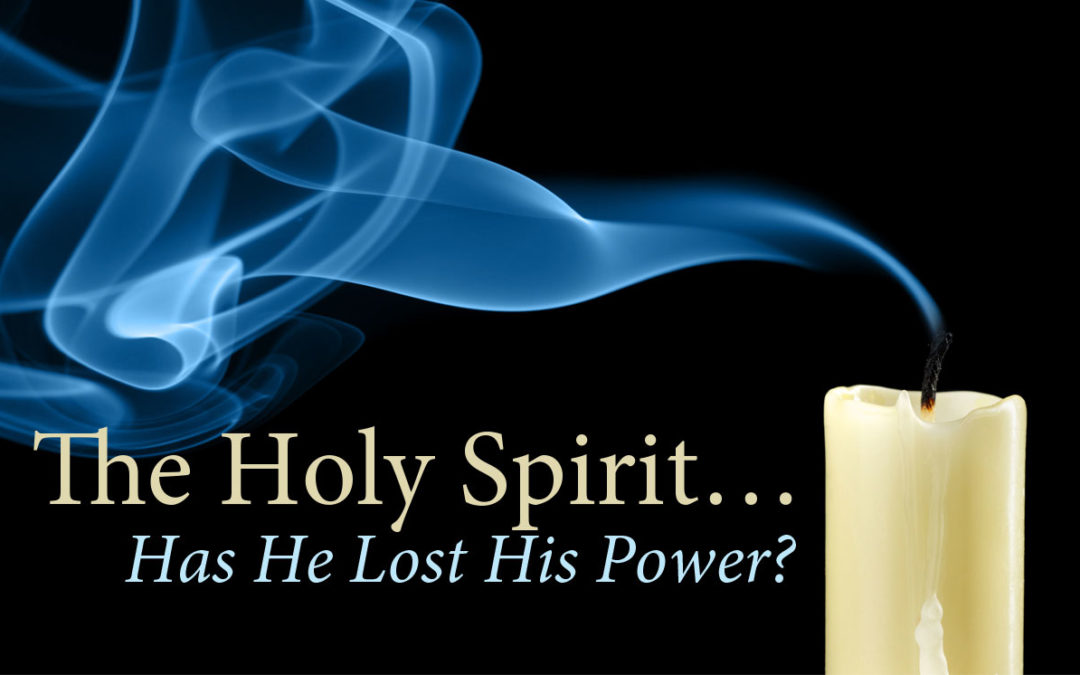 Some time ago, I asked a friend of mine how his work for the Lord was progressing. He looked rather wise and said, “Not very well. You know it is the Lord’s work, and the devil fights anything that is spiritual.”

Many will not admit to such a blunt conclusion; but this subtle philosophy has effectively pulled the rug from under much of the work of true holiness.

All sorts of dismal human failures hide under this cloak of perverted reasoning. Small groups of disheartened saints meet for years without ever making a gain in Sunday School attendance, much less winning the lost for Jesus, making a moral impact on the community, or spreading abroad “everywhere” the glad tidings that the Holy Ghost has indeed flooded their hearts with joy unspeakable and full of glory.

Are holiness and spirituality popular?

Of course not. Jesus made this emphatic in the Sermon on the Mount. He promised persecution and hatred from the world. This present world system with its pride and rebellion will never be a friend of grace. He who would be a friend of the world is an enemy of God.

Holiness will never be reconciled with this present world system. But if we dropped the subject there, our conclusion would be unscriptural and disastrous to the cause of Christ. The same Lord who invited us to champion an unpopular cause also promised us all power through His abiding Spirit.

Lack of popularity and lack of power are not necessarily synonymous. A king does not have to be popular to be powerful, nor does Christ. He was neither more nor less popular than our message of holiness, but He was powerful. The common people heard Him gladly. His fame was spread throughout the land. He demonstrated His power over nature, over disease, over men, and over sin. He never met a situation over which He did not triumph, including the cross. And before he ascended into Heaven He promised, “He that believeth on me, the works that I do shall he do also; and greater works than these shall he do; because I go unto my Father.” (John 14:12)

This is hardly a prescription for failure!

Pentecost was a triumphant fulfillment of these promises. The Church filled with the Holy Ghost was not found cowering in deserted church buildings strumming on the theme, “Holiness is not popular.” The account of those days fairly glows with power and victory and progress.

“…the same day there were added unto them about three thousand souls.” (Acts 2:41)

“…Praising God, and having favour with all the people. And the Lord added to the church daily such as should be saved.” (Acts 2:47)

“…many of them which heard the word believed; and the number of men was about five thousand.” (Acts 4:4)

Is it too much to expect Christ to manifest His Lordship over nature, disease, men and sin as He did before Pentecost? Was that not what He promised? But this power is available only through the channel of faith. Good people may lack faith and thus hinder the work God wants to do. Is this why some apparently spiritual people are powerless? They have been inoculated with dead unbelief which allows them to commend themselves for their own spirituality while placing the blame for failure on the times, or the opposition of the enemy.

When Paul talked about preaching with the demonstration and the power, he was not talking about an emotional display. He was talking about a kind of preaching which produced results that in turn convicted unbelievers. And he did not need a church building filled with seasoned saints to produce results. He could go into the market places and into the synagogues and preach with demonstration and power.

But what about the falling away in the last days? Doesn’t the Bible predict such an apostasy?

Yes, but there are some things the Bible does not predict. It does not say that the Gospel will ever lose its power to win the lost. Apostasy comes within the church. People have to be saved before they can fall. The Bible teaches a falling away among the Gospel-hardened, but an adding-to from the unevangelized masses. The Spirit is still moving in the world—and will right down to the end of the age.

The Bible also does not limit the power of God in and through those believers who do not apostasize, and who do not lose confidence in the promises. The power of the Holy Spirit will be limited to the extent that the church is faithless and unbelieving. But to those who are obedient and believing, HIS POWER IS THE SAME AS EVER.

This leaves us with two conclusions. First, we must stop expecting failure. It is time we brought our lives into alignment with the conditions for revival and then looked with expectation for the fulfillment of the promises.

Second, we must heed the command of our Lord to “Go into all the world.” This includes those vast pagan masses in our own land; the lost who have never been confronted with the true Gospel; “The unevangelized tribes of the American campus,” (Eric Fife); the heathen of our concrete jungles. It is time we moved out of our ecclesiastical treadmill and “went everywhere preaching.”

No, holiness will never be popular with this present world system and all who are aligned with it—in the church or out. But the Holy Spirit and the holiness He imparts is as powerful today as ever.

In a day of gloomy discouragement and thick clouds of doubt, it is time to remind the church that the Holy Spirit has never lost His power!